Next is now, world music as the single most potent force in the culture of fusion ... World music-makers are like shamans, carrying us on magic carpets of riffs and melodies through states of consciousness that spin us out of time to lands not yet invented but glimpsed on the aural horizon ... And so we see that music brings us, in the jumping of our cells, from what is past to what is trying to become the future. lt expresses and fulfills our need to hear the spirit in the dark.
(Jean Houston in Jump Time, Sentient Publ. 2004)

Natural Trance is a patchwork linking modern culture with ethnic sound. The Hilight Tribe, five musicians and one sound doctor at the mixing desk, play a live performance for the dancefloors of the 3rd millenium. Digeridoo, Djembe, Guitar, Congas, Drumset or Bass , among others, come in synchronization with the Drum kick. Travelling the world is part of the deal, that's how the band finds its happinness, inspirations and way of life! 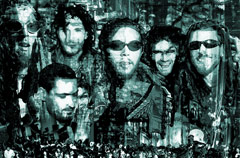 The only 100% live performance in trance made his way from the hights of Ibiza to Hungaria, Japan (Vision Quest), USA, Brazil, Germany (Natraj Temple), Morocco, Spain, Mexico (etc.) and of course in France where they're based and sold already more than 40 000 albums. (6 released, 4 video-clips on the MTV and the French channels)

The six people of the band play Trance music with guitar, bass, didgeridoos, rock drum and a lot of ethnical percussions, adding sometimes Indian and Tibetan mantras, all filtered with special effects to produce a powerful trance live act considered in all the Festivals and concert rooms as one of the better French bands, and trances live act.

Soon in all good trance shops this unbelievable instrumental sonic vortex due to its immediate feedback on stage leads us irremediably where we want to go: trance. - Hilight Tribe on MySpace

In the late years of the 19th century, as the Native american indians were witnessing the final chapters of their peoples' genocide, the Hopis had a vision:

"When the Earth shall be ill and that humans will have forgotten who they are, then, members from every race of the planet will unite and form one Tribe. It will save humanity and clean what is to be cleaned. The persons constituting this Tribe will be Rainbow warriors" - Hopi Prophecy.